•As states have relaxed social distancing guidelines, growth has picked up sharply.
•Federal support has played a key role in countering the economic effects of the pandemic.
•The recession began in February and may have ended in April or May – the shortest on record. That just means that the economy began growing again, it doesn’t mean that the economy has recovered.
•The pace of recovery will depend on the virus and efforts to contain it, but it will likely be several quarters before GDP returns to its pre-pandemic level.

Efforts to contain the spread of SARS-Cov2, the strain of coronavirus that causes COVID-19, led to an unprecedented decline in U.S. economic activity this spring. As states have relaxed social distancing guidelines, growth has picked up sharply, also on an unprecedented scale. However, the initial rebound will leave us far short of where we started the year, and there’s a lot of uncertainty about the virus and the future availability of a vaccine or effective treatment against it. A full recovery will take time.

Social distancing had a major impact on several sectors of the economy, notably air travel, hotels, restaurants, retail, spectator events, and healthcare – anything where one would come into close contact with other people. Job losses in these sectors have been massive. The leisure and hospitality sector lost half of its jobs between February and April. A key concern was whether that economic weakness would snowball – that the corresponding loss of wage income would lead to further reductions in consumer spending. That spending is someone else’s income. However, second-round effects have appeared to be relatively limited thanks to government aid.

Fiscal stimulus shores up the system

Federal support has played a key role in countering the economic effects of the pandemic. Increased spending on healthcare was critical in treating the infected. “Recovery rebate” checks and expanded unemployment insurance benefits helped to shore up household income. Lending to small businesses kept many firms operating. Federal aid to the states offset strains in state and local government budgets.

The fiscal support was as unprecedented as the downturn itself. More will likely be needed. Extended unemployment benefits are set to run out at the end of July. State and local budget strains will worsen amid falling revenues and recession-related spending increases. The first three phases amounted to nearly $3 trillion, over 14% of gross domestic product (GDP). Bear in mind that the deficit was running at over $1 trillion per year prior to the pandemic, with the economy near full employment.

The Federal Reserve’s (Fed) response to the pandemic was quick and forceful. The Fed cut short-term interest rates to effectively zero in early March and restarted asset purchases (quantitative easing). It relaunched liquidity and lending facilities that it had employed during the financial crisis and created some new ones. The size of the Fed’s balance sheet rose from around $4.2 trillion in late February to $7.1 trillion at the end of June.

Many investors are concerned about the government’s ability to repay the additional borrowing. However, the government is nothing like a household. The government only has to make interest payments and be able to roll over maturing debt. That’s not a problem currently. Interest rates are low and are expected to remain so over the long term. While the federal government has been borrowing more in the near term, the Fed has increased its holdings of Treasury securities. Private savings have increased and the demand for safe assets is strong.

Still, the federal budget was on an unsustainable path before the pandemic. Federal debt was rising as a percent of GDP. At some point, beyond the pandemic, lawmakers will have to work to bring the deficit in line. That doesn’t mean balancing the budget. Rather, we should try to have the national debt stable or falling as a percent of GDP over time. Lower deficits will require higher taxes, cuts to entitlement and other spending programs, or some combination. However, there is no rush. The bigger dangers are not doing enough to back up the economy in the near term and ending support too soon. Budget austerity may have broad political support, but it would make the recovery weaker.

Some investors worry that the Fed’s efforts will fuel higher inflation. This is the same concern that was expressed during the financial crisis. Inflation is a monetary phenomenon. Yet, the relationships between growth, inflation, and the money supply broke down in the early 1990s. For the most part, the Fed views inflation as driven by inflation expectations and pressures in resource markets – capital, labor, and raw materials. Following the great inflation of the 1970s and early 1980s, the Fed spent decades establishing its credibility as an inflation fighter and was perhaps a little too successful in keeping inflation low. It has struggled to achieve its 2% inflation goal over the last several years. Importantly, the Fed and other central banks around the world have not abandoned their inflation goals. There is no conspiracy to monetize the debt. 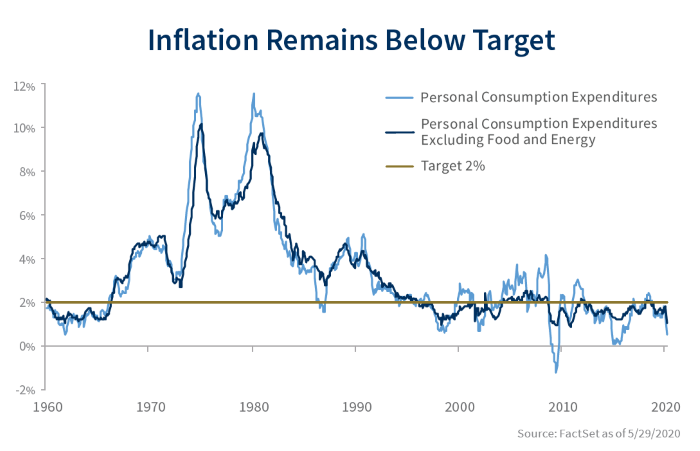 The pandemic has shifted from a supply shock to a demand shock. There is excess productive capacity globally. While there may be some bottleneck inflation pressures as economies around the world begin to recover and supply chains are adjusted, significant inflation pressures in capital and raw materials are unlikely. In the U.S., the labor market is the widest channel for inflation. Labor cost pressures are expected to be mixed, but generally moderate. In the near term, high unemployment should keep wage increases in check, although job losses have been highest at the low end where there wasn’t much pressure to begin with.

The recession began in February and may have ended in April or May. That would be the shortest downturn on record. That doesn’t mean that the economy has recovered; it simply means that the economy began growing again. As the downturn was unprecedentedly large and swift, the initial rebound will be exceptionally strong and investors have eagerly embraced that view. Economists expect that third quarter GDP growth will be the strongest ever recorded, led by a sharp rebound in consumer spending. With the ability to spend limited in the downturn, savings improved, and that should fuel spending in the near term. However, the initial rebound will leave the level of GDP far below where it was at the end of 2019.

Looking ahead, the pace of recovery will depend on the virus and efforts to contain it, but it will likely be several quarters before GDP returns to its pre-pandemic level. It will take the economy even longer for GDP to get back to its previous trend. Absent a vaccine or effective treatment, the sectors affected most by social distancing can be expected to recover gradually. We could have some luck with the development of a vaccine, but risks to the outlook into next year appear predominately to the downside.

One fear is that reopening the economy too soon raises the risk of a second wave of infections and a more prolonged period of social distancing. More likely, the U.S. has implicitly settled on a trade-off between economic activity and a moderate pace of new infections and deaths.

Severe recessions usually leave long-lasting impacts on economic activity. Consumer behavior and global trade are unlikely to return to previous patterns. While the recent improvement in the economy is welcome, there will be significant long-term damage in some sectors. As Fed Chair Powell noted, the coronavirus has taken a human and economic toll and “the burden has fallen most heavily on those least able to bear it.”

From the Desk of Dale Crossley and Evan Shear

Trading vs. Investing… Growing vs. Protecting

Social Security Increases Benefits by 5.9% for 2022

Buyers are following through on yesterday's rebound effort in front of the FOMC policy decision. Corporate news, including earnings, have provided additional support. ... See MoreSee Less

Worried that #inflation will wreck havoc on your #investments? Find out how stocks and bonds have done in most inflationary environments. ... See MoreSee Less

Why is one of the largest, wealthiest and fastest-growing demographics often overlooked by product and service providers? Learn why Dr. Joe Coughlin of the MIT AgeLab believes the 50+ age group is "the world's most misunderstood market." ... See MoreSee Less

Unlocking the untapped potential of the Longevity Economy

The market is bracing for an eventful week of earnings. Reports could ease or exacerbate concerns about corporate profits, Fed tightening plans, and inflation. ... See MoreSee Less